21 - How Tacky Girls do Pajama Jeans 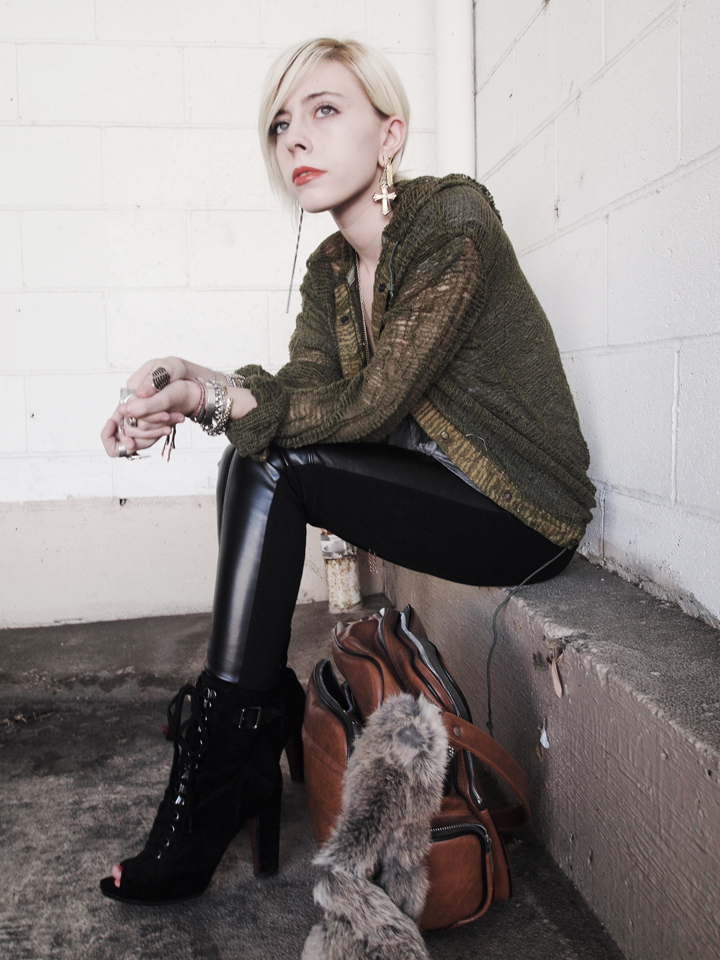 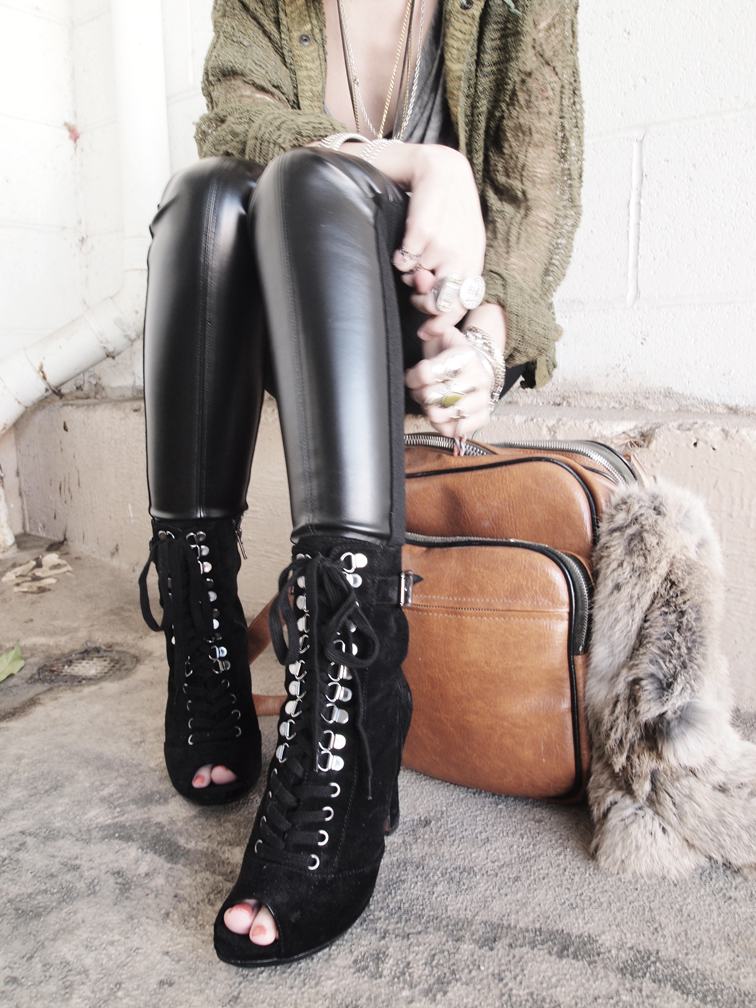 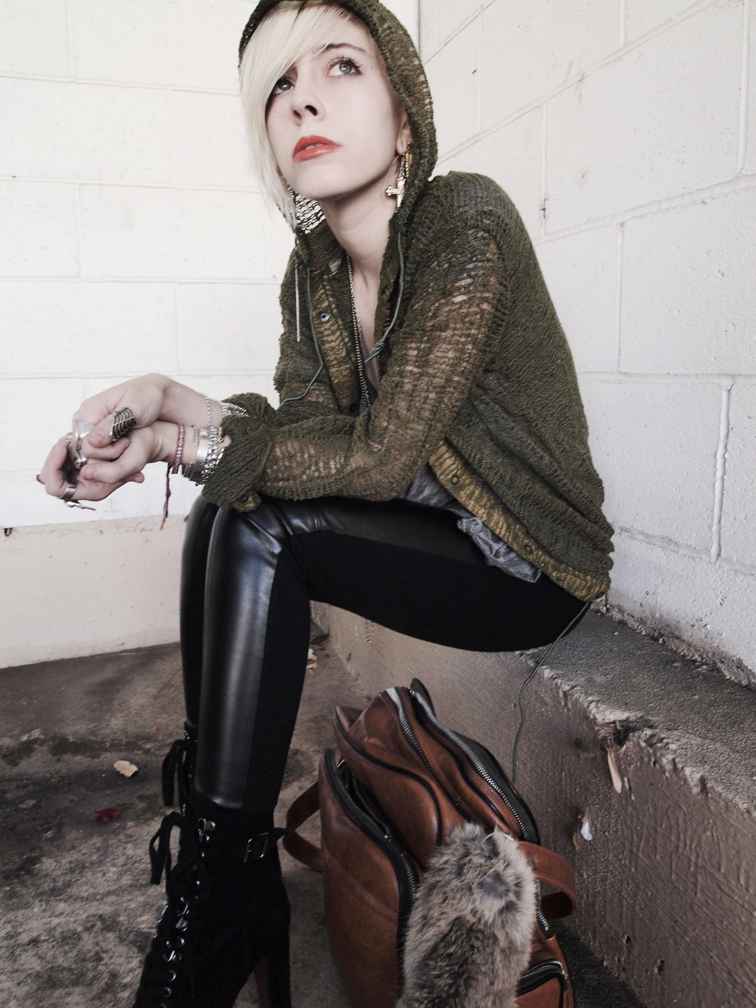 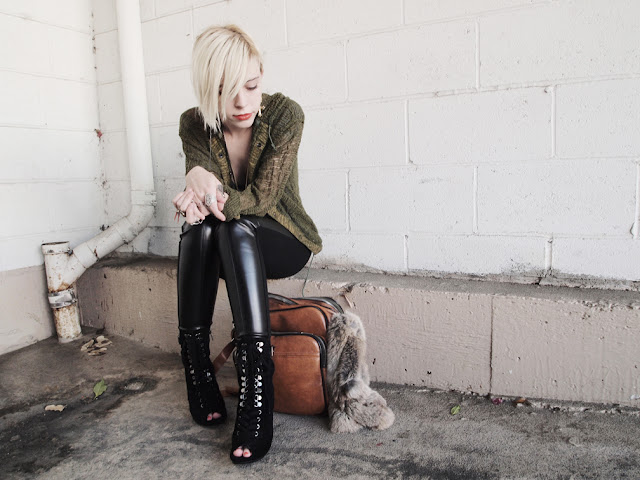 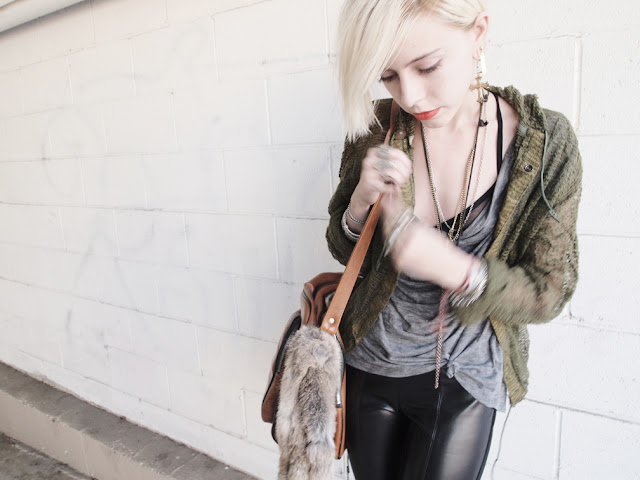 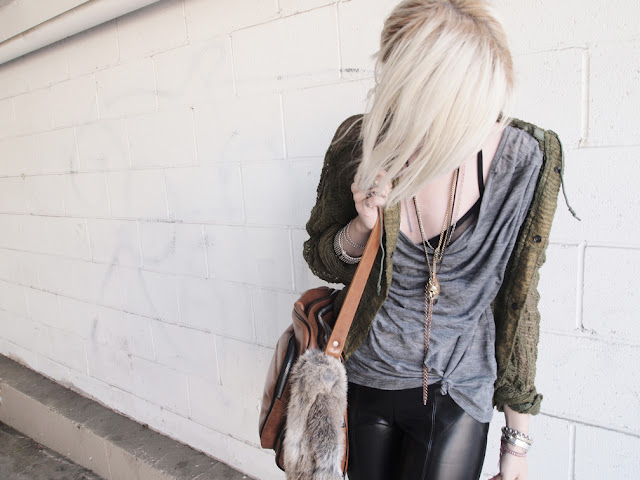 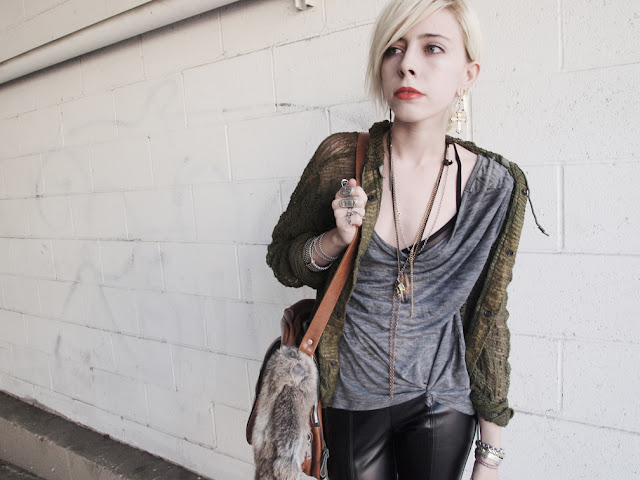 Oversized Tee - Alternative Apparel, Strange Green Netted Hoodie - Army Surplus, Leatherette Pants - Equipment General Technique, Peeptoe Suede Boots - Sam Edelman, Camera Bag - Vintage, Jewelry - Vintage & Konstantino, Coral Lipstick - Revlon (!)
These leatherette/knit pants are my new favorite thing(s?) ever. They were on the Neiman Marcus Last Call website for $35. I got them in the mail yesterday, and when I tried them on, it was like putting pillows on my legs. "I want to wear them to sleep!" I exclaimed with delight. Then, reality sank in. Holy moly, these are basically the super-tacky equivalent of pajama jeans. So now I affectionately refer to them as my pajama jeans, despite the fact that they are neither pajamas nor jeans. They are just so comfortable that I feel like I'm getting away with something every time I put them on. It's like Kanye says, "How can something so wrong make me feel so right?" I feel like Kanye and I really have a deep spiritual connection now. We get each other. Kanye said it when singing a song to bring cultural awareness to blood diamonds, and now I'm saying it to bring blogosphere awareness to how comfortable my pants are. DO NOT LET YOUR MIND BE BLOWN BY HOW SIMILAR IT IS.
In other news, Fall 2011 is starting up. If you're really into two-second harsh critiques of Fall 2011 collections written entirely in Valley Girl vernacular, by all means, read on.

Z. Spoke by Zac Posen: We get it Zac, you're sooooo totally young and edgy and stuff. We know -- every magazine has been telling us so for the past five or six years. That said, I'm totally loving the navy blue and black combo.

Rachel Zoe: You know what, Rachel Zoe? You're going to be someone's mom, so it's okay that this is the painfully safe and boring. I mean, don't get me wrong, it's not bad, I just really would have appreciated a bit more crazy from you.

Organic by John Patrick: Oh hi, my keyboard just short-circuited because I was drooling all over everything. How amazing are these layers of unexpected chunky knits paired with collared button-downs and waterproof shoes? I absolutely love this.

M. Patmos: I'm a total sucker for comfy knits in neutral colors. However, I find it hard to concentrate on the clothing because all I can think is, "Are those K-Swiss? Did they style every look with the shoe-of-choice for Junior High Pep Squad?" At first I was gagging while I contemplated these shoes, but then five minutes later I was eBay searching K-Swiss. Maybe I need a pair of K-Swiss. Nothing says effortless like a pair of K-Swiss. Kenny Powers wears K-Swiss.

Gary Graham: I like this collection because Gary Graham seems to have the same approach to apparel that I do, in that we both just say, "How can I make this look like something an insane person would wear?" Now if we could change those Converse out to something a little less cliche, this would be near perfection. Let's get some K-Swiss on those girls STAT.
Alright, that's all for today. This is for Lauren of Champagne and Marshmallows: