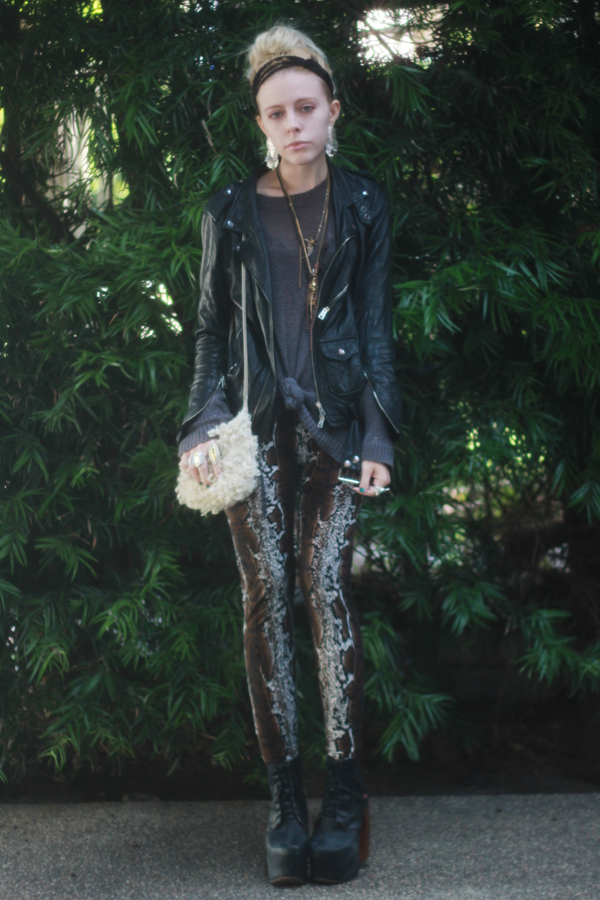 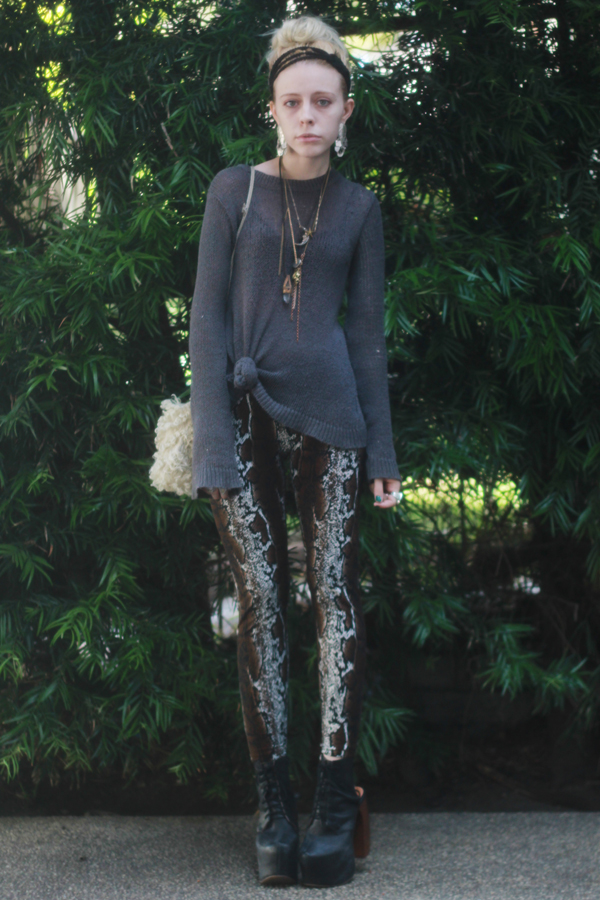 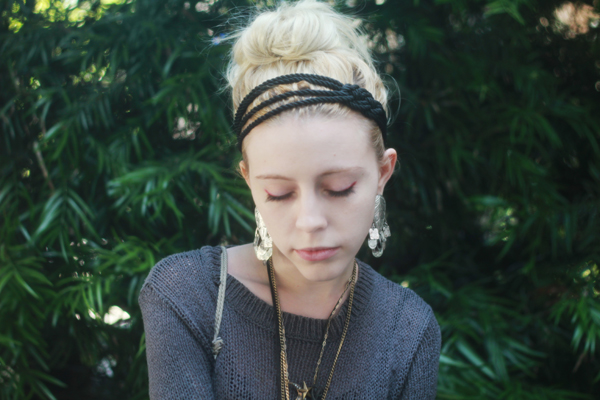 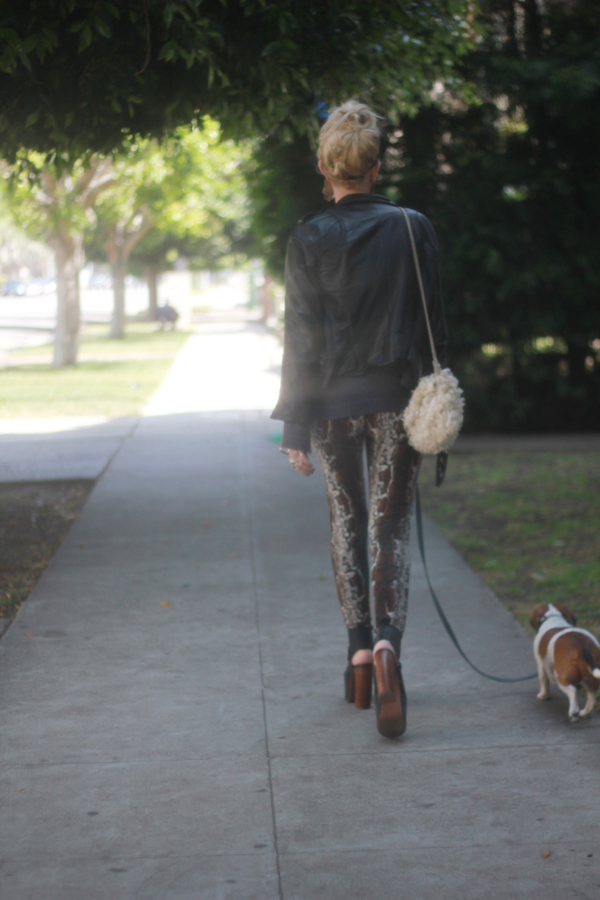 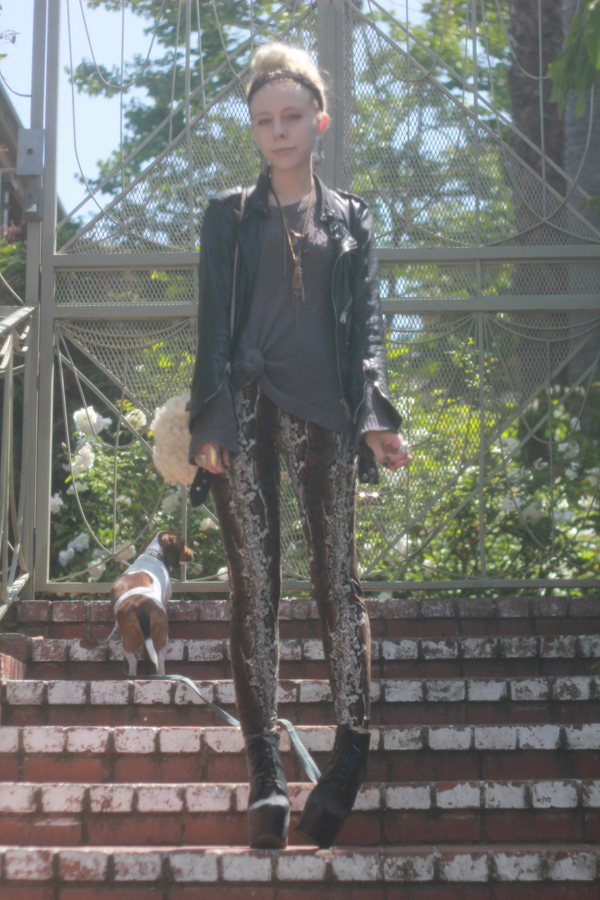 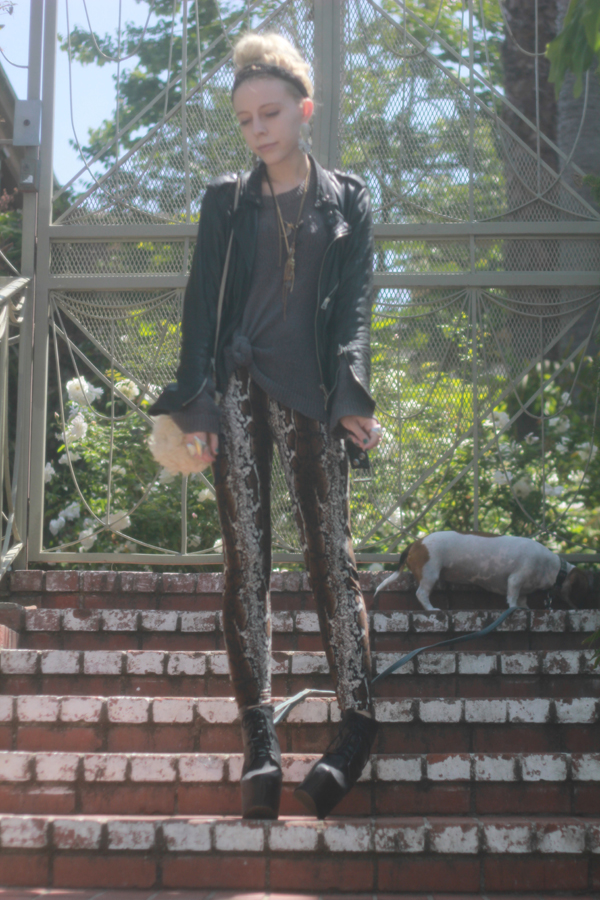 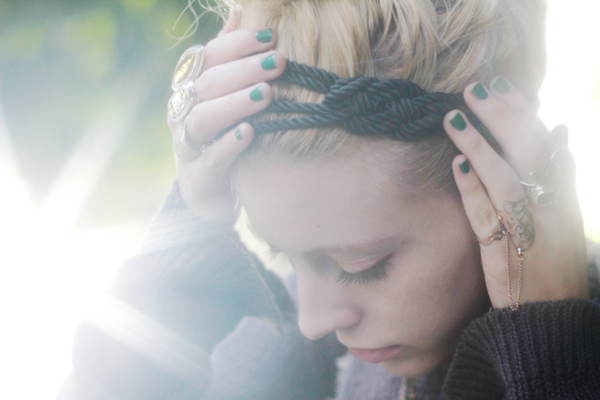 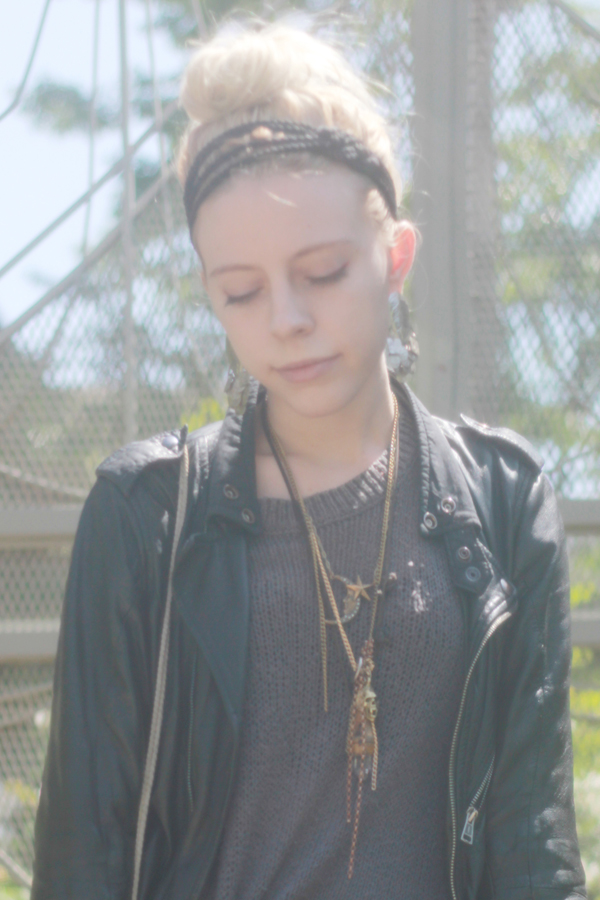 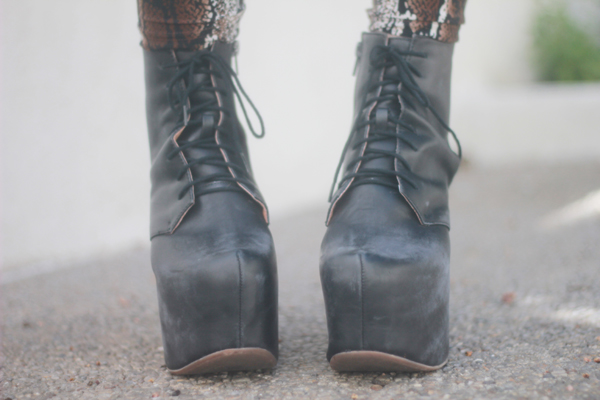 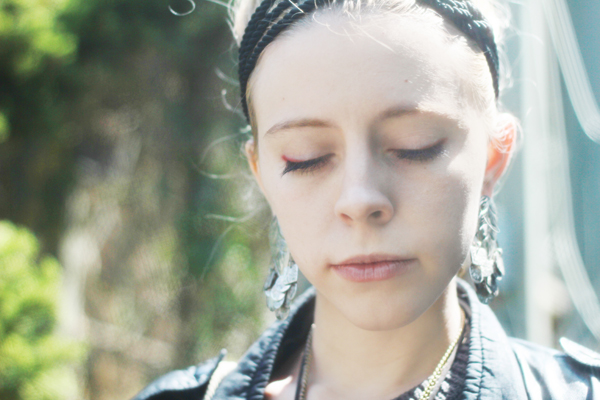 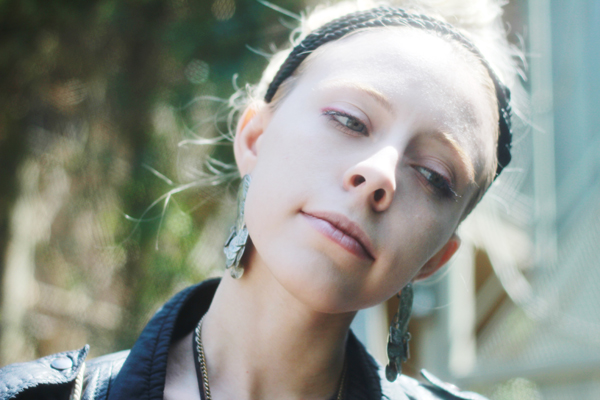 Headband - Forever 21, Jewelry - Vintage + DIY + Konstantino, Jacket - SWORD (borrowed), Sweater - Vintage, Bag - Vintage, Leggings - from eBay, Shoes - Jeffrey Campbell, Nail Polish - OPI Jade, Eyeliner - Burgundy Revlon Lipliner
Picture overload today, eh folks? I was rummaging through an old bag and found a bizarre filter. I got the bag at a thrift store, and while I use it as a purse, it dawned on me that it was probably intended to be a camera bag. The filter has this crazy star effect on it that makes light reflect into a burst, so today was a play day with ultimate 1970s glam-rock star power, and now you have been bombarded with my face and crazy snake-skin print leggings. I actually feel like this is a total Hallie outfit, now that I look at it. If I'm biting someone's style, she's a good one!
As a mid-season evaluation, I'd say that my ideal Spring/Summer wardrobe would shape up to be a lot like the Balmain Spring 11 runway, minus the pumps. I'm not a pumps kind of girl. Since I didn't have a blog when Spring shows came out last year, I'm going to take this opportunity to recap my favorite Balmain SP11 looks, and apologize for the overkill:

I know that everyone already had their freakout sesh over how radsauce the Balmain studded jackets are, so I won't mention that. What I will mention is this: there was a funny post about the ripped tees over on Stop it Right Now. I interpreted the Stop it Right Now post to be quite funny, because I read it in the light of, "Ha! You will spend $2570 on a trashed tee shirt, but I will spend $10 and trash my own tee shirt! I WIN!" Some commenters, however, seemed to think that there was something wrong with Balmain charging $2570 for that shirt. I assume this is because a lot of people don't really understand the way apparel production works, which is fine. I didn't really understand until I went to college to study it all. It didn't cost Balmain $5 to make that shirt; trust me, it is not advantageous to them to have a crazy high profit margin, because even high-end designers are pressured to keep their prices competitive. Believe it or not, they struggle to offer the lowest prices possible. There is just a different standard of "affordable" applied in that market. My guess is that is cost Balmain around $700 to make that shirt (really rough math). Remember, they paid for fabric and labor in Euros, which already doubles the USD price. The fabric alone probably cost $100/yd (fashion students will know this is certainly not unheard of for fine silks) and the person hand-cutting (see all of those seemingly random cuts? not random, had to be marked out and done according to a pattern in exactly the right place at exactly the right angle so as not to adversely affect the way the silk falls) and pinning that shirt was probably paid a decent living wage to do so as opposed to working in a dimly lit factory with limited wages and an unnerving absence of break times, and it probably took them countless hours to do this whole process, which rakes up the labor. Also, those safety pins are probably sterling silver and not the ones you get in the little plastic box at the drug store for $3, so I'm sure the cost of hardware on that shirt is probably a couple of hundred dollars. So it cost Balmain around $700 to make it (approximately 350 euros -- again, this is crazy-rough math, people), they sell it to a retailer for around $1400 (making $700 profit, which is fair because they are only selling a couple of those bad boys, not the thousands of units that affordable fast-fashion moves at $20 a pop), and then the retailer sells it for $2570, keeping the difference between cost and retail, about half of which goes into paying back the retailer's overhead and the other half of which is profit for the retailer, which is, again, fair because that retailer is moving fewer units at higher price points.
Certain things cost a lot of money because a lot more goes into making them. I can't afford those things. That's fine. They exist in the world, and someone else can afford them. And you know what? I will laugh at that $2570 on that ripped tee shirt because if I want that tee shirt, I will set aside a few hours and rip and pin a thrifted silk shirt and feel awesome because I cheated the system, but that's because $2570 is a lot of money to me. That's the price of a car to me (yeah, I don't exactly have spendy taste). To someone else, though, that might be a worthwhile investment, because they have never been 15 and punk rock, and they do not have the time or desire to DIY that shirt, and $2570 is chump change to them. And that really doesn't affect me much, unless perhaps if they do not buy that shirt they will instead spend the $2570 to end rape in third world countries, but I somehow doubt that people buying high-end clothing are deeply considering whether their money is better spent on clothing or on effectively assisting the well-being of persons around the world -- something tells me it's not an "either-or" decision. You know, if that ever were the case, though, then I might have a reason to care
EDIT: As the always-lovely Kat pointed out in my comments, Blogger had a bit of a meltdown this week and ate all of the comments that had previously been on this post. Apologies if your comment is now gone! I fear this has happened to all Blogger blogs' most recent posts at the time of the crash.