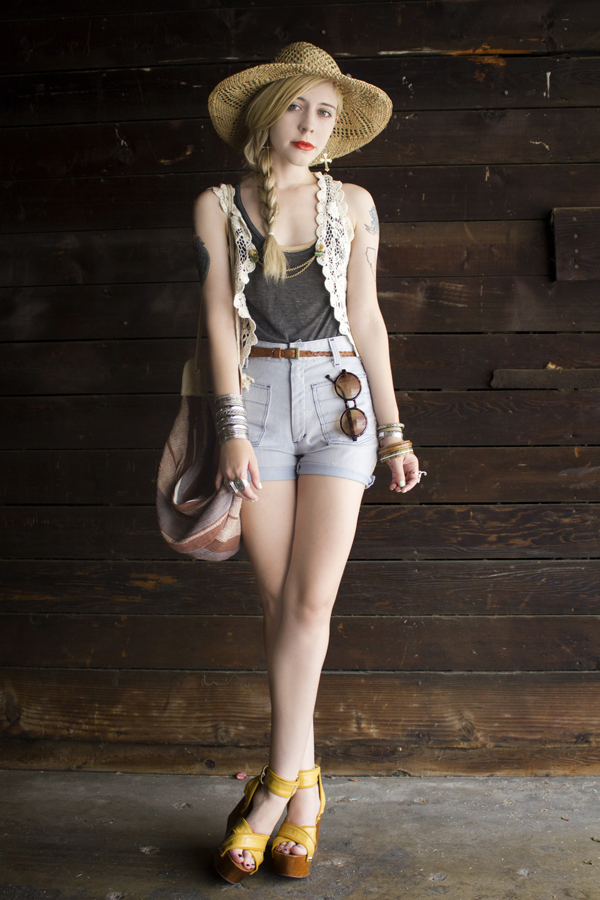 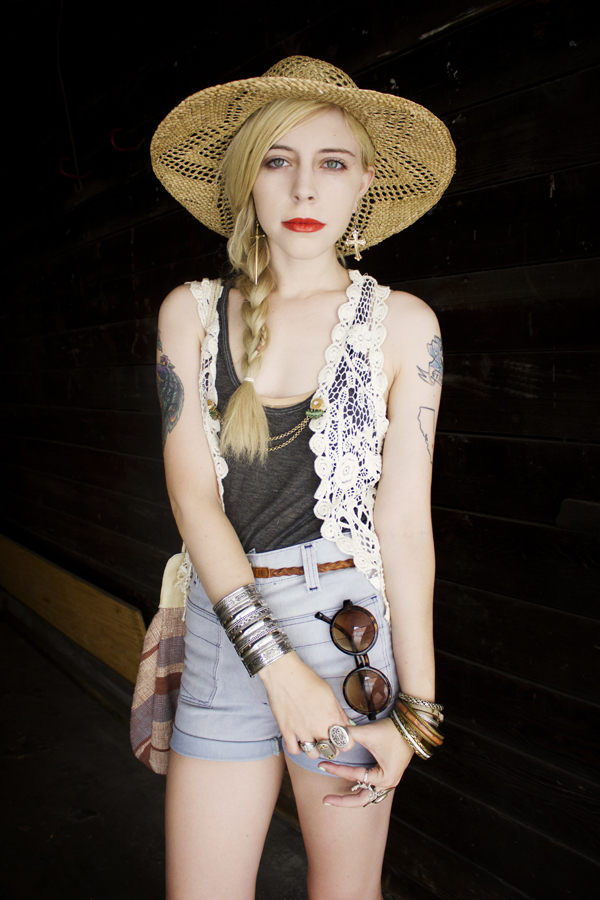 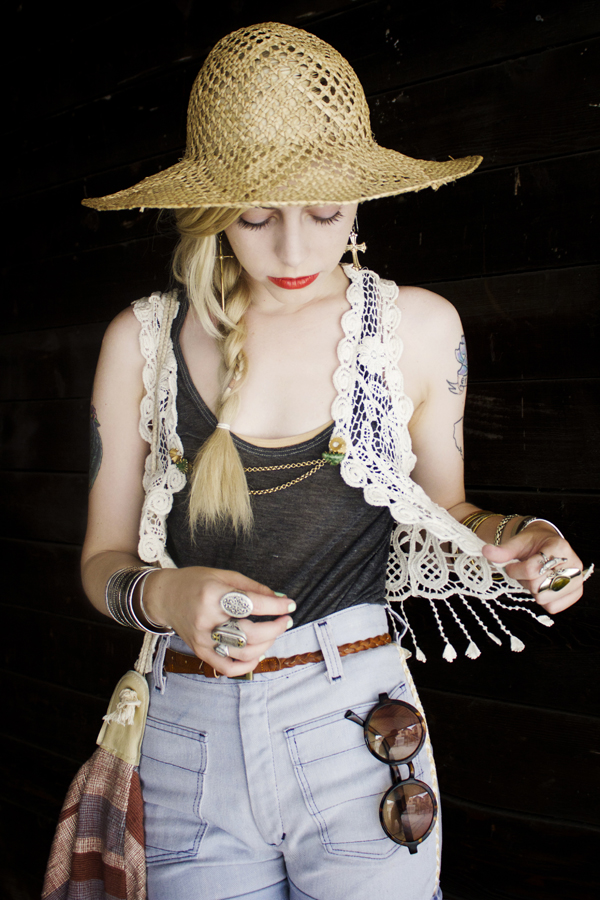 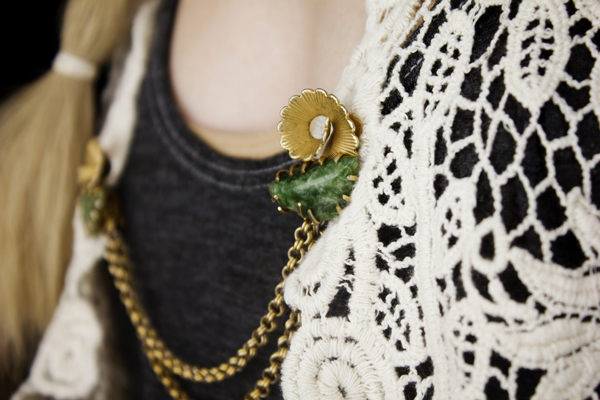 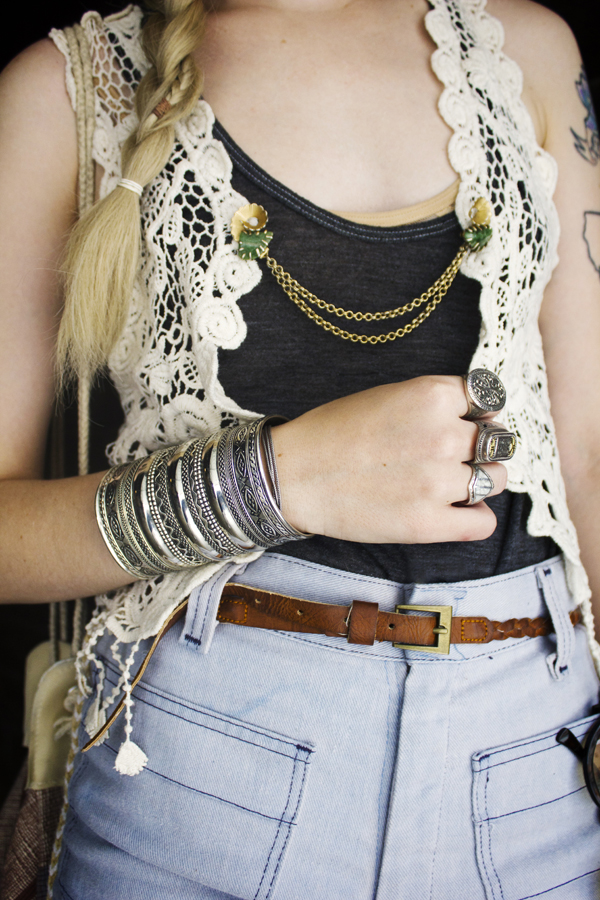 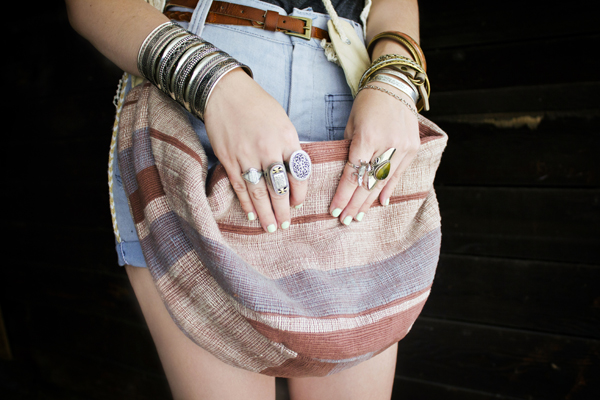 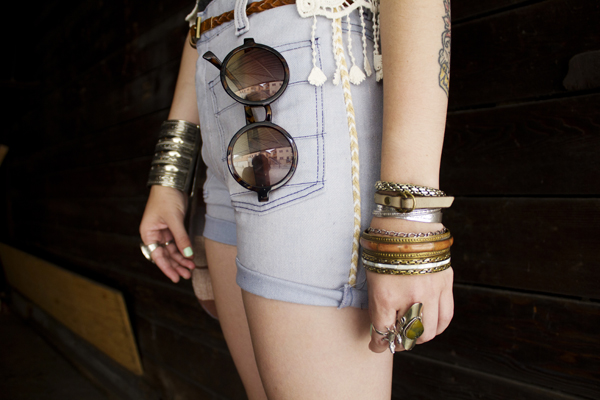 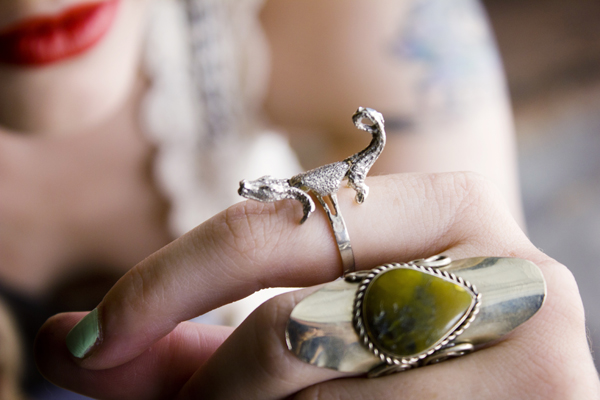 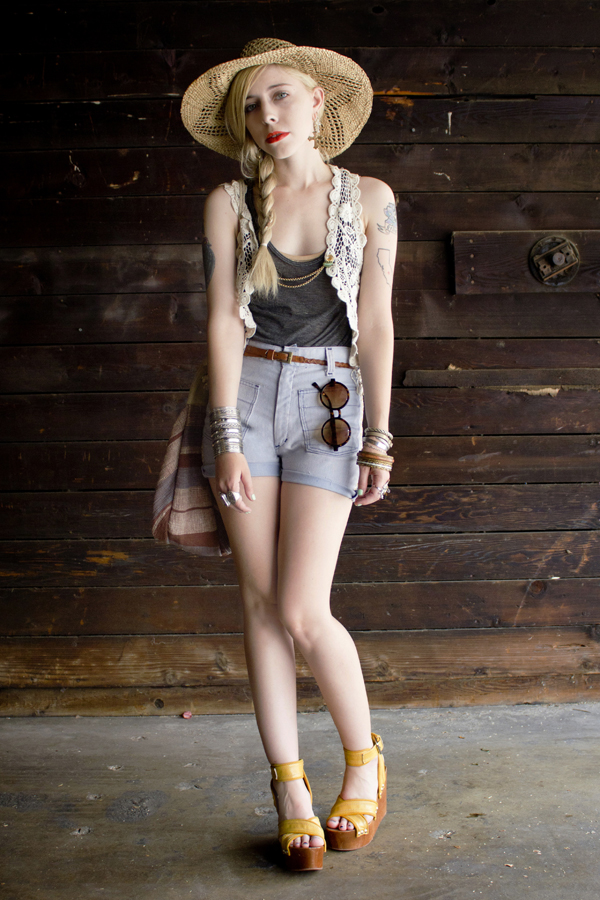 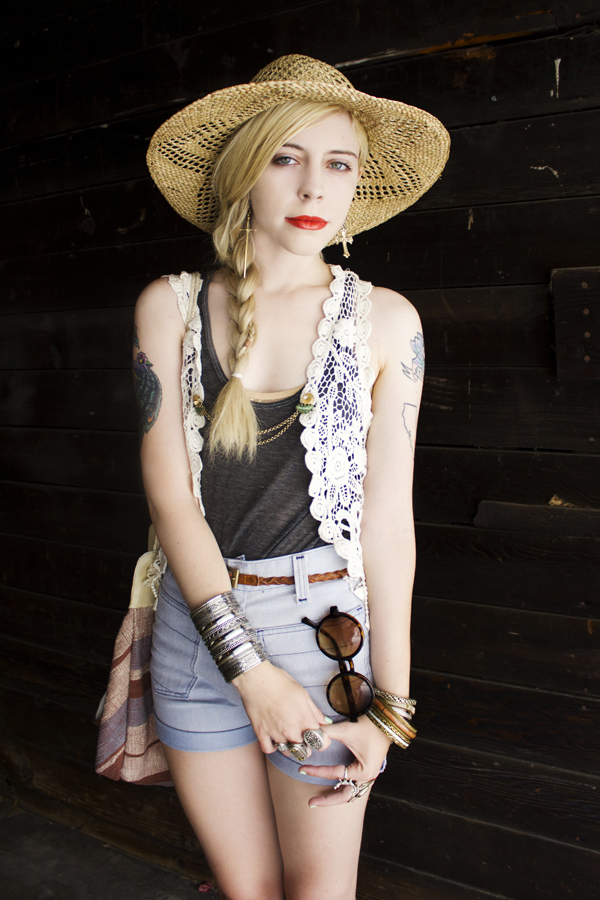 Vest - Courtesy of Chicwish ($30 -- it fits the rule, y'all!), Belt - Forever 21, Big Cuff - Courtesy of JFR.SE, Lizard/Iguana/Alligator (?) Ring - Gift from Brit's trip to Mexico!, Shoes - www.wholesale-dress.net, Lipstick - Revlon in Kiss Me Coral, Everything Else - Vintage (I think?)
100 outfit posts! Yeah-yuh. I have been waiting for a super-hot day to wear this Chicwish vest, and I finally got one (sidenote: I think Chicwish should be the go-to place for anything crocheted and pretty-like). In fact, yesterday was SO hot that Brit and I were melting while working the Telltale Hearts vintage party. Like, seriously, melting. Every photo of me from that event looks like I'm wet, as though perhaps I just went swimming or something. Oh, no, I was just standing around in Los Angeles heat, don't mind me. However, the event was fantastic. We sold gear, ate quesadillas, hung out with the always amazing Nicki Wong, and met some fine new folks (including some rad people from LA Vintage and Echo Park Independent Co-Op). Also, Telltale Hearts is an amazing store with vintage and new in a wide range of pricepoints. Someone's getting added to my recommended shopping list...

I feel like my 100th post should be an epic retrospective on my blogging process thus far, but really, I am exhausted and have a busy day ahead of me tomorrow, so my brain is not working quite as well as I had wished. Instead of something brilliant and insightful and appropriate, I will leave you instead with brief musings inspired by a comment left by Northwest is Best. She left a comment regarding nonreligious persons wearing crosses, which is obviously a big trend right now. As this is a kind of fashion philosophy (and y'all know how I love me some o' that) I thought I'd throw my musings in on this.

I believe that as time progresses, symbols (especially those affiliated with mainstream cultures in certain geographical locations and social groups) evolve just like other forms of language do (because really, symbols and icons are a form of language). Through this progression, they can become naturally re-contextualized. Where once a symbol had a singular meaning, through centuries of existence in multiple different settings, it can come to represent a number of different things. I believe that due to its perseverance and high visibility in Western culture, the cross has undergone a process of evolution that leads it to currently be interpreted differently by different people. I think that this re-contextualization, which is enhanced by pop-culture and the media, explains the movement of non-religious persons wearing this particular motif. It simply means something different to everyone who wears it, and symbols are always open to the interpretation of the viewer. As a general rule, I support this process of re-contextualization of iconography as both a form of art and social critique/commentary, especially when the iconography comes from a high-visibility group of people who tend not to be subjugated or persecuted in the area in which this re-contextualization occurs.

Now, I am going to exhaust myself further with my Bloglovin' subscriptions. Hey, can we all make a pact right now that this week is going to be rad? Please dress accordingly. From where are the three unlinked pictures?! This is why I hate Tumblr sometimes. EDIT: Thanks to the anonymous reader who tipped me that the last photo is from http://www.badlands777.com/! Oh geez, in love with that blog now.