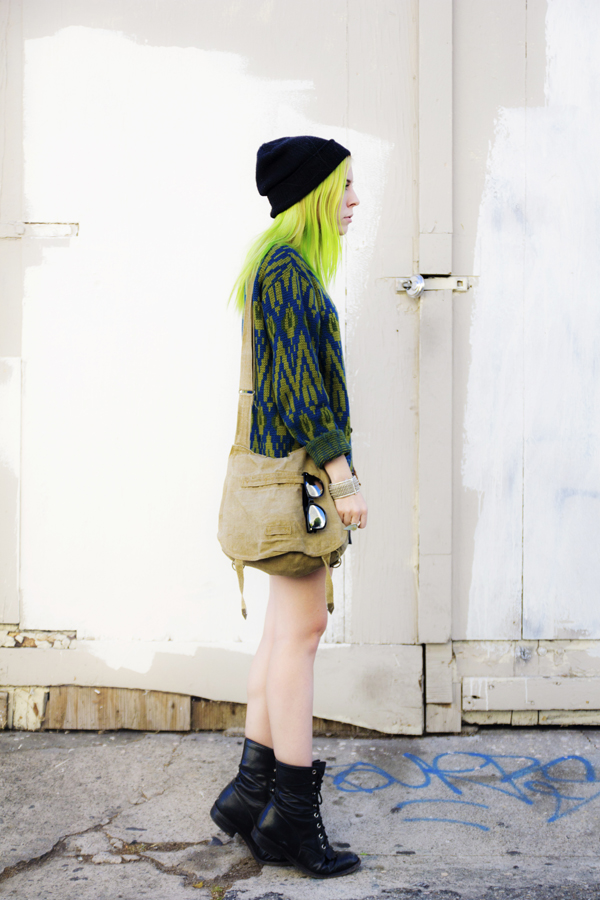 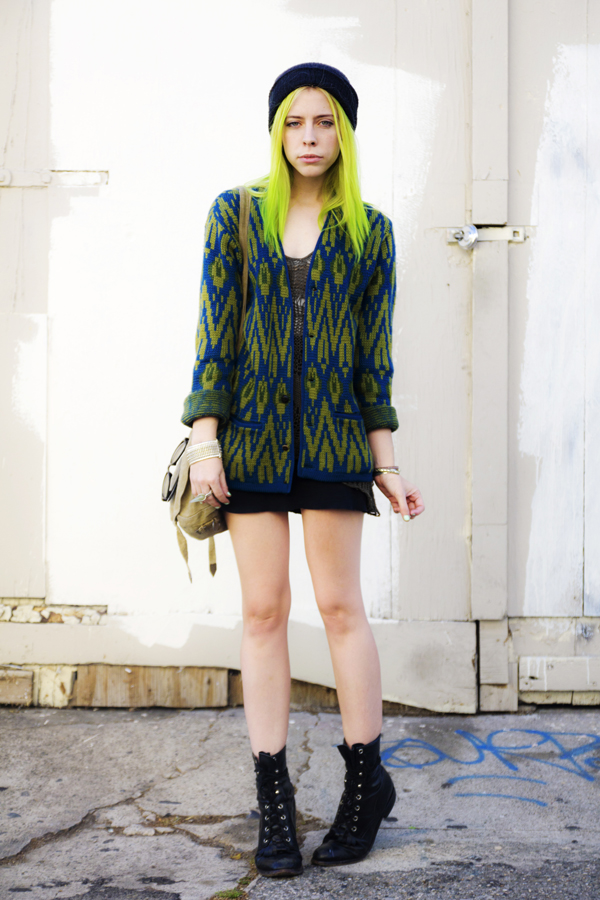 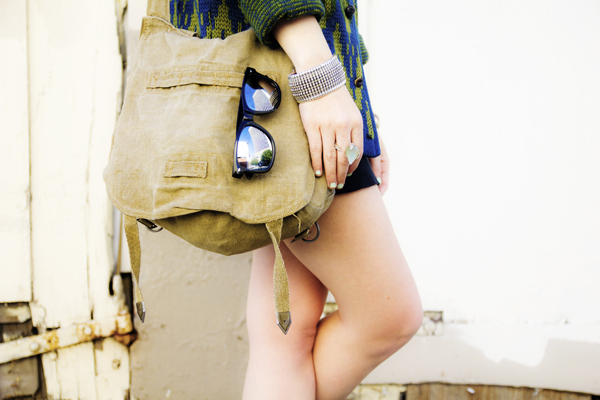 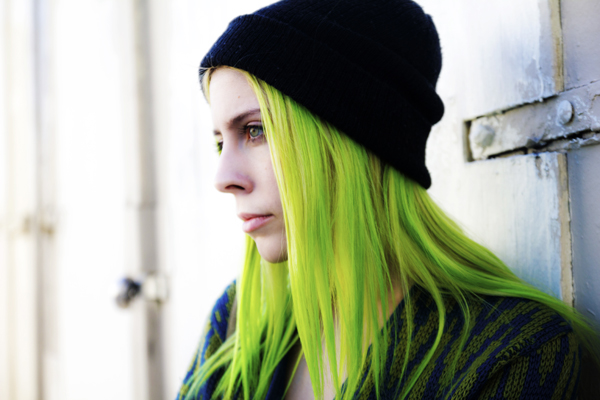 Everything is thrifted except for the boots, which are secondhand from eBay, and the jewelry, which is Konstantino & Unearthen

So, here it is: lime green hair debut. I wish I could be more excited about it, but I am at this awful place right now where I feel as though I should just give up on humanity. I'm really glad that people seem to like the video discussions that have been going on, but am deeply disappointed by the number of backhanded blog "compliments" I have received as a part of it. The worst part is that I honestly don't think the commenters realized how rude they were being.

Then, yesterday, a friend posted a link to a designer's Fall collection on her Facebook page, saying that she liked it, and one of her friends (heteronormative male) replied with this:

"Fashion people are the worst people in the world. Worse than rapists and bankers. I doubt any of them have ever had a psychedelic experience in their lives, because if they did they probably would have killed themselves once they go inside their head and realize what a tragedy their existence is."

There is so much wrong with this statement that it depresses me even having to think about it. First of all, it is never okay for anyone to downplay the severity of rape, ever. EVER. You cannot compare anything to rape because few things are as horrific as rape, and for a man to so flippantly equate someone who makes and sells clothing to a rapist is hands-down inappropriate. It dismisses the horror of the atrocity and establishes a precedence that rape is appropriate material about which to joke.

Next, there is the issue that someone might think "fashion people are the worst people in the world." Fashion is an artform like any other. There are many different elements and sides of it. There are fashion critics who make a living off of their opinions. There are fashion designers who make a living off of creating art and inspiring people to take ownership of their preferences to create a movement of people dressing for themselves. There are fashion bloggers who (might) make a living off of inspiring people with their aesthetic tastes. There are knock-off companies who make a living selling designer looks at extremely low prices. There are stylists who make a living putting together key items in an aesthetically-pleasing manner to inspire people with their own manner of dress. There are fashion magazine editors who make a living selling people the new latest looks or trends. There is "mall" fashion which is based off of making someone look sexually appealing or insuring that someone people are "on trend". This is a multifaceted industry, and none of those brackets of the fashion industry are inherently good or evil. Like anything else in life, it comes down to people on an individual or corporate level. Yes, some people in the fashion industry are so absorbed in the profit-making potential that they deliberately instill poor self-image in young women in an effort to make them want to continuously purchase the next big thing. However, that is just some people. Other people in the fashion industry use fashion as a tool to make women feel empowered; they put women in pants, give them pockets, make them feel strong and in control, give them tools to dress loudly and obscure their body to the male eye, give them shapeless floor-length shifts and androgynous silhouettes and black lipstick and still call them beautiful.

You can use fashion to inspire or comment upon social or political issues. You can also use fashion to turn a profit and nothing more. You can also use fashion to stroke your own ego. However, you can do the latter two examples with absolutely anything in the world. Any way in which fashion can be culturally destructive may be applied to any number of things: food production, fine art, writing, politics, media, etc.. Even fine art carries a price tag. The gallery system is also an industry. Art can be Damien Hearst (similar to a celebrity fashion line -- someone throwing heaps of money at something in order to make more money), Thomas Kincade (similar to "mall" fashion -- produced on an assembly line for mass market appeal), Andy Warhol (similar to Phillip Lim or Proenza Schouler -- a trendy media darling who is pushed by industry critics). However, in both art and fashion, you have the creator who is genuinely inspired and wants to share that inspiration with the world to contribute to different ways of viewing and understanding the "self" and the world around the "self".

What fashion offers that these other things do not is this: fashion is a predominantly female-oriented industry. Even a man who engages in fashion is deemed feminine by his peers. Fashion is connotatively feminine, and therein it carries great weight for the feminist. Fashion answers the question, "How do women want to dress?" That is important. Even a heterosexual wealthy white male designer must answer this question if he wishes to be relevant in this industry. It is increasingly a tool for women to choose how they wish to be seen, who they think they are. As women begin to care less and less about how men view them, fashion begins to cater less and less to how men view women, and this is a progression that needs to be seized. This is why things like fashion blogging, which could be deemed frivolous by an outsider, are really so essential to fashion: fashion blogging puts the power back in the hands of the wearer and creates a more directly cyclical system of influence from designer to wearer. They can inspire and be inspired by each other more directly due to the ease of information-sharing that comes with technological development.

Why on earth would someone insist that "fashion people are the worst people in the world"? I fear that this is because of a patriarchal viewpoint. While there are certainly exceptions, fashion still remains very much a female thing in the eyes of many men. A typical heteronormative male can dismiss fashion as "women's work", and therein dismiss women. For anyone who doesn't understand fashion or doesn't care to understand it, it easy to dismiss the power fashion has as a tool for feminist progress. When a woman dismisses the value that fashion has in this manner, I find it personally understandable -- women have been wronged by fashion in the past. However, when a heteronormative man dismisses the value that fashion has, it reeks of blatant sexism, and therein lies the problem.

Okay, I'm not going to talk about "issue-y" things for a while after this. I don't want my blog to get too "preachy", so I try to control the frequency with which I adress these issues. The next few posts will be fun, I promise!