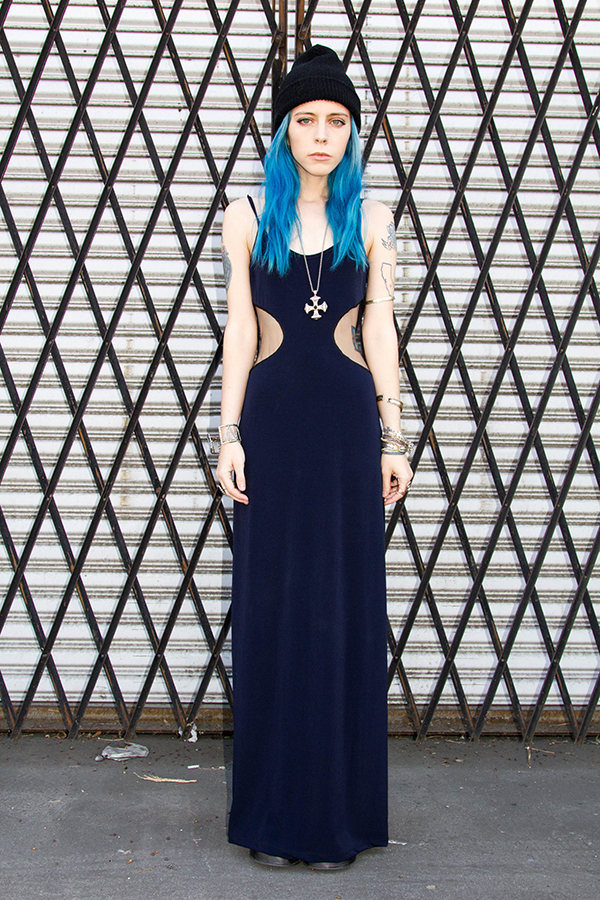 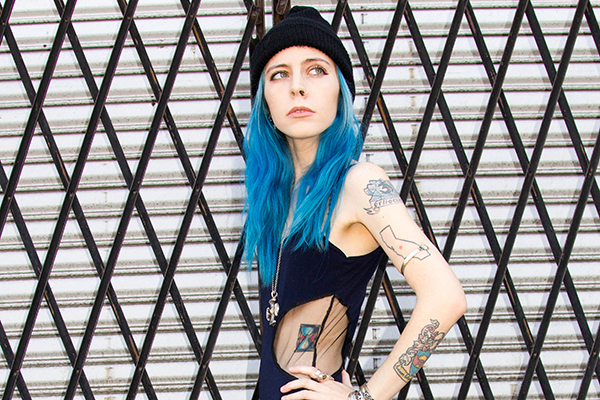 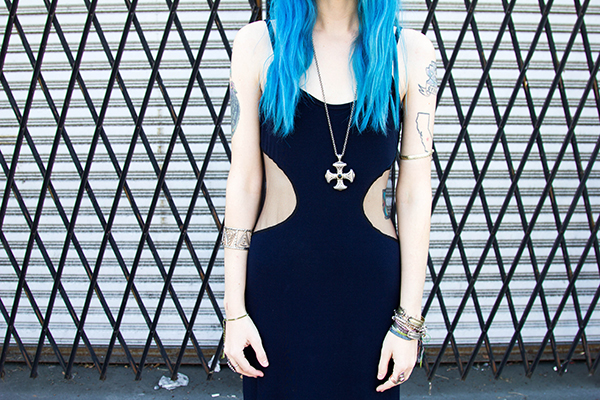 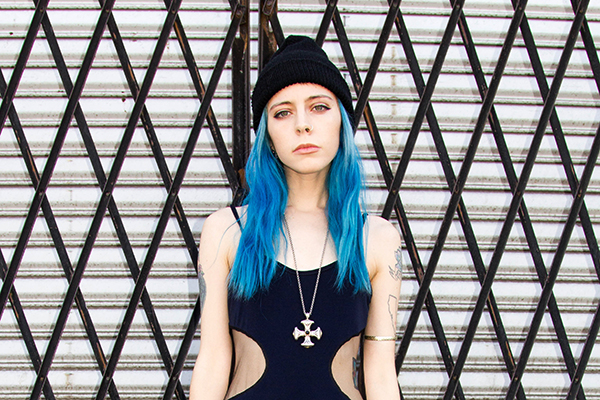 Brit took these photos for me outside of The Original Cult. I'm really loving working there. She and Kali and I have this little back area of the Kill City design loft all cozied up with cute lights and pet snakes and it's really a lot of fun. The Kill City assistant designer Clara sits back there with us, too -- a nearly-five-foot-tall mini babe with turquoise hair piled on top of her head like a saltwater cyclone.  I feel like we are in our own little world a lot of the time -- barring welcome interruptions from the charmingly cynical British menswear designer Paul and his similarly cynical Cairn terrier Randy, or the offbeat dry Missouri-born-and-raised women's designer Jen. Sometimes, the company owner Drew (an original punk in the 1970s who now, at nearly 50, is a heavily-tattooed vegan/raw-food enthusiast waif of a troublemaker in tight black jeans and destroyed old combat boots) bounces in to try things on or ruin designers' days by yelling that "shit looks fucked up, man!" or just randomly play guitar at us noting that we are a captive audience. "I've got a cast of characters here," Drew often says about us, but I think he's the biggest character of all. He wears a portable can opener attached to a long necklace underneath his tee shirts. "I've had this thing since my band would tour in the '80s!" he says, as we shoot each other perplexed looks when he uses it. The can opener is almost certainly older than I am.

The Kill City design loft sits on top of the design pit that houses creatives for Lip Service. Upstairs, it's high-waisted jeans and moto zips and beanies. Downstairs, it's bondage and fetishwear and punk rock heritage. We don't understand each other, and I like it that way. "Fucking hipsters..." the Lip Service team mutters under their breath. "Fucking weirdos..." the Kill City team says, rolling their eyes. It's outcast-on-outcast rivalry, but really, we're all in this together, finding solace in a company that on the outside, appears to function more like an anarchist artist collective than a legitimate business with over twenty years of experience in the industry. "Wouldn't it be cool if we didn't have to sell shit?" Drew once mused, pouring over samples of Cult's drug humor screened tees. "It'd be like fucking punk rock summer camp in here! We could just make art all day!" It's not outrightly expressed, but the meaning is implied. Art and money are usually at odds.

The irony isn't lost on me. It's a company that was founded by a punk rock dude on punk rock principles, which is inherently flawed rhetoric. There's nothing punk about making money...unless you're fucking with the system in the process. Drew stands in the middle of the aisles at trade shows, too bored to sit still in his own booth. He yells at well-dressed people when they walk by: "Hey you -- yes or no?" pointing at his displays, skin-tight denim and leather jackets hanging from DIY pipe racks that he and his old punk friends made themselves. He chases interesting people down. "Hey, you look cool! I want to know you!"

As I get older, I understand that there comes a time when you must choose between doing something you love or trying to make money. We think about that stuff with Tunnel Vision sometimes. "How do we make a living off of this shit?" we ask. But I think I'm beginning to understand the truth: if you do something you love, there probably won't ever be enough money, because art and money are usually at odds. We'll always be a bit behind, and we'll always be working a little bit harder, yelling at the internet as it passes us by, "Hey you -- yes or no?" pointing at our webshop, a blip on the radar next to goliath stores who sell "cute" as though it were a lifestyle. We don't do "cute" well. We do "emotionally complex psuedo-intellectual" well, and I guess that's what makes us the underdogs.