Interlude - My Outfit is Not an Invitation 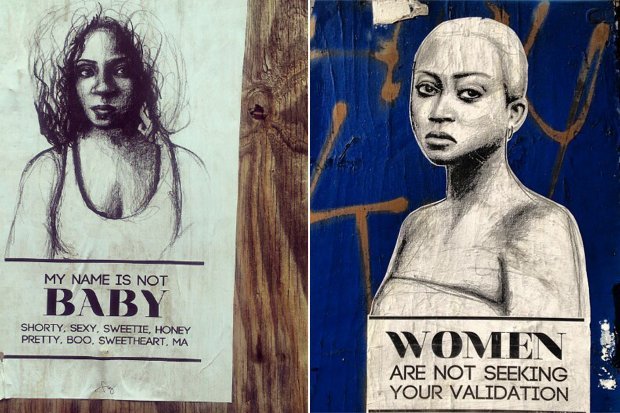 This project is SO FUCKING COOL.

"Stop Telling Women to Smile" is a street art project by Tatyana Fazlalizadeh aimed at providing a countervoice to street harassment. I like this project because it utilizes public space to offer an educational, easy-to-understand response to men that are in our environment every day.

The thing that is most shocking to me about public treatment of women by men in our culture is how few men understand the offensive nature of their public catcalls or unwanted conversation. As a woman walking down the street, I've had a variety of responses to men who holler at me.

When I was younger, my reaction was to flip guys off and yell "FUCK YOU DOUCHEBAG" at them. As you can probably imagine, that just provoked hostility. "FUCKING BITCH, I'LL KILL YOU" they'd yell back, and I'd usually chase after their stupid pick up trucks or whatever yelling, "I'M FUCKING CRAZY, I'LL CUT YOU, YOU DON'T KNOW ME" while throwing things at their cars as everyone else on the street looked on perplexed and the guys sped off just kinda confused and mildly entertained.

So, as I got older, I tried a variety of other ways of addressing this problem: staring, making funny faces, screaming "DON'T FUCKING TALK TO ME"...you name it. However, nothing has been as effective for me as this approach: very calmly approaching the man in question and saying, "You shouldn't talk to women on the street like that. All day, every day, men yell things at us, try talking to us, stare at us, and sometimes even follow us. So, even if you're trying to be complimentary, and I'm sure you are -- you seem like a very nice person, it still makes us extremely uncomfortable. Women don't like it, so it would be nice if you could stop." The response I usually get from men after saying this is a sincerely shocked look, followed by, "I'm so sorry. I didn't know -- I was just trying to be nice. I'm very, very sorry."

Quite simply, our culture teaches men and women that women exist for male entertainment. So, it's no surprise that many men don't understand that this isn't the way most women would like to be perceived or treated. Most men also don't know that they're not the only person that day who will comment on our appearance, or the only person that week who will yell something at us from a car at a stop sign, or that right before they told us to "give them a smile" a man also may have followed us down the street yelling "suck my dick bitch" while grabbing his crotch because he didn't understand why we weren't complimented by his attention. It is hard for a man to imagine what it is like to be a woman in a patriarchal society.

Since my belief is that most men honestly don't want to be horrible to women -- they simply don't realize that they are being horrible to women because society seems to condone that kind of behavior, what I like about the above project is that it is straight-to-the-point and it is informative and therefor has the power to very honestly create a change in how men treat women on the whole.

Fazlalizadeh's Kickstarter for this project was successful, and I hope to see the above street art present in my town very soon!